Black is my
happy color.

For the love of horses..

I don’t remember the full details of my first pony ride but there are some things that stuck with me. And maybe those things are why I am the way that I am today.

I was probably around 2 or 3 years old when my parents took my older sister and me out to this place that had a horse and pony. I remember going up to rusty red metal fence panel where the horses were standing inside the pen. The pony - judging by the picture - was probably some sort of very light-colored palomino Shetland. Even with the stigma of ponies being “naughty”, I don’t recall there being an issue, at least not enough of one where my parents wouldn’t let me sit on it.

There was another one, too. A very big, very dark horse – and big being relative to a small child. Judging by the old photos, it was probably black or maybe more of a very dark bay. But it look absolutely MAGICAL standing in front me. So regal, powerful, and intimidating. I'm not 100% as to the breed, but whatever the answer, THAT was the one I wanted to touch!

I remember sticking my tiny little arm through the panel and trying so desperately to touch the chest of the dark one. The horse was standing with its head over the fence but standing back JUST far enough for me not to reach it. The little pony, however, was very interested in me and my struggle. He put his muzzle towards my arm so I was able to pet him.

The events that unfolded up until this particular point are pretty much gone, other than me just being picked up and swung into the saddle of .. the pony! I was not particularly impressed by this. You’d think, for your first pony ride, a child my age would be super happy or maybe even terrified or crying. However, in this photo, there’s no doubt that I was completely disappointed. My face says it all.

I was a stoic child to begin with but this photo makes me laugh. No smile. No crying. Not a single inkling of how I was feeling that day. Just me doing what I was being told and hanging on to the saddle horn with an utterly blank, emotionless face.

To add insult to injury, my older sister - who wasn’t particularly fond of horses or animals in general - got to ride the black one with my mom! I mean, what?! I was the one who loved animals! Why couldn’t I ride it?! She was only 2 years older than me! I could've held on too! 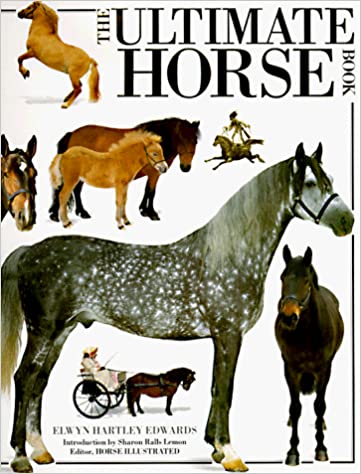 I’m confident with saying that’s where the whole (black/dark) horse craze started.
Fast forward several years to one of my birthdays. In the mid-90’s, I was maybe around 10-11 years old when I received “The Ultimate Horse Book” (1991 publish year) as a gift. Of course, I found myself going through it non-stop, reading every page, every line, and caption. I was destined to be an expert!

​       Eventually, I come across a descriptive caption that read along the lines of “…is always black.”

Although that piqued my interest, the horse in the book - compared to what I know now - didn’t look all that appealing. It looked like a basic black horse with some wavy hair and feathering. Nothing very magical about it. And at the time, I had no way of knowing of how to actually pronounce it. I think I had called it a “free-sigh-ann.” .. I tried.
The paper cover of my book has long since been damaged and thrown away. But I do still have this book.